This biotope typically occurs on the upper faces of tide-swept circalittoral bedrock, boulders and mixed substrata exposed to varying amounts of wave action. The mussel Mytilus edulis forms dense beds, to the exclusion of other species. The starfish Asterias rubens is frequently recorded, and it predates heavily on the mussels. Occasionally, the anemone Urticina felina may be seen within crevices in the rock or on gravel patches. Crabs such as Necora puber and Carcinus maenas may be seen on the rock or mussels whilst fauna observed in crevices typically consists of the lobster Homarus gammarus and the crab Cancer pagurus. The anemone Sargatia elegans can be seen attached to bedrock and cobbles, whereas the barnacle Balanus crenatus may be seen attached to the mussels themselves. 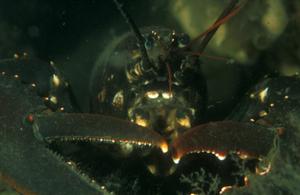