Pinus halepensis forests of Spain, considered native for at least two-thirds of their considerable expanse; they are mostly restricted to eastern regions on the Mediterranean slope of the Catalonian mountains, the Maestrazgo, the pre-Baetic ranges of the upper Guadalquivir basin, the southern Andalusian mountains; they penetrate farther inland in the Ebro basin and around the headwaters of the Tagus and Guadalquivir systems. They appear to extend north along the coast of the French Golfe du Lion to the region of Agde. 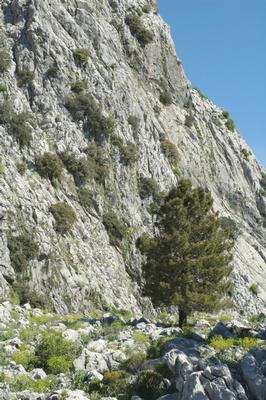