Shrub formations of the southern wooded steppe zone of the Ponto-Sarmatic region, in which Prunus spinosa often plays a dominant role, constituting, in particular, natural, stable biocoenoses on degraded chernozems, similar, in appearance and bush-layer composition, to the sub-Atlantic European recolonisation thickets but with an herb layer dominated by steppe species. 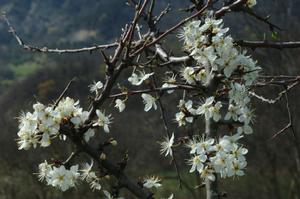