Bog hummocks formed by the swollen-leaved, brownish or greenish-red Sphagnum magellanicum, characteristic of suboceanic bogs, notably of bogs of the Danish archipelago, of sub-Atlantic Scandinavia in southeastern Norway and western Sweden, of northern Central Europe, of the southeastern Baltic lowlands, of the middle European Hercynian ranges, from the Ardennes, the Central Massif, the Vosges, the Black Forest east to the Bohemian Quadrangle, of the northern pre-Alpine plateaux and the Alps south to the southern Alps, of Amurland, also reported from the subalpine level of the Altai. 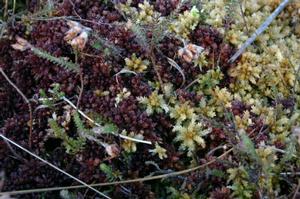