An assemblage of the small un-branched filamentous green seaweeds Ulothrix flacca, Urospora penicilliformis and Urospora wormskioldii at High Water Spring Tide level on steep and vertical rock often influenced by freshwater. The community is also present in areas with freshwater seepage. It is visually recognised as a closely adherent, often shiny, green mat of filamentous growth. Associated species include the green seaweeds Blidingia minima and Enteromorpha prolifera, the barnacle Semibalanus balanoides and the limpet Patella vulgata, but these species are not common. Although this biotope does occur on rock other than chalk, this description has been derived from chalk coast sites. More information is needed to improve this description.
Situation: On chalk coasts this community can include Enteromorpha spp. and the transition from MA1-215 to MA1-23G is often indistinct and a mixed zone of MA1-215 and MA1-23G can occur.
Temporal variation: This biotope is more easily identifiable from autumn to spring as both Urospora spp. and Bangia atropurpurea may dry out and disappear during the summer. In late winter the red seaweed B. atropurpurea may be predominant and the community then appears as shiny blackish mats of filamentous growth. 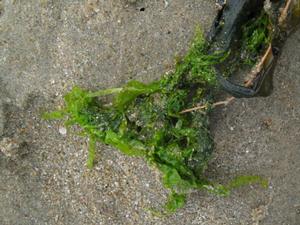