Small strands with infralittoral pebbles are very numerous in the indentations of rocky coasts. The most typical is the biocoenosis when the pebbles are rather small. The characteristic species here are the two amphipods Melita hergensis and (Allorchestes aquilinus) Parhyale aquilina, which feed on organic detritus, and the fish Gouania wildenowii. G. willdenowi, predator on these amphipods. One finds also a characteristic crab, Xantho poressa, and several turbellerians and nemertines. After long periods of calm a thin film of diatoms is found on the pebbles. When the pebbles are larger this typical biocoenosis is often impoverished, but mixed with tolerant species coming from neighbouring rocks such as the sea-star Asterina gibbosa, the small anomuran (Porcellana bluteli) Pisidia bluteli, the gobiescoid fish (Lepadogaster gouani) L. lepadogaster, and so on. During stormy weather all the species escape from the moving pebbles to the lower parts of the boulders generally mixed with the pebbles, or to deeper bottoms, to return as soon as the sea becomes calm 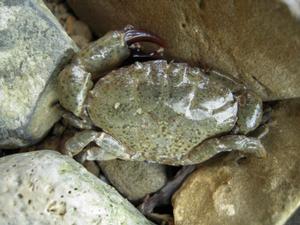