This biotope typically occurs on the upper faces of moderately tide-swept, moderately wave-exposed circalittoral bedrock or boulders (although a variant is found on mixed substrata). It most frequently occurs between 10-20m water depth. The biotope is exposed to varying amounts of scour (due to nearby patches of sediment) and, as a consequence, is characteristically dominated by dense Flustra folicaea, a range of colonial ascidians and a variety of other scour/silt-tolerant species. In addition to F. foliacea, other bryozoans present in this biotope include Alcyonidium diaphanum, Bugula flabellata and Bugula plumosa. Varying amounts of the soft coral Alcyonium digitatum may be recorded, depending on the amount of scouring which may vary locally. Where scour is a major factor, species such as the scour-tolerant Urticina felina are frequently observed. Hydroids present in this biotope include Nemertesia antennina, Halecium halecium, Tubularia indivisa and Hydrallmania falcata. Other species present include silt-tolerant sponges such as Scypha ciliata, Cliona celata, Leucosolenia botryoides, and the ascidians Clavelina lepadiformis and Botryllus schlosseri. Balanus crenatus may be recorded occasionally on the boulder/rock surface, and the crab Cancer pagurus may be observed finding refuge in crevices and under boulders. More ubiquitous species present include Asterias rubens, Crossaster papposus, Ophiothrix fragilis and Pagurus bernhardus. Three variants of this biotope have been defined. Unit MC1-2162 tends to have a high abundance of barnacles, which populate the rocky seabed. The second variant (MC1-2161) is characterised by abundant Polyclinum aurantium in addition to F. foliacea, which often incorporates sand grains into itself, giving the crustose appearance of sandy rock nodules. Finally, MC1-2163 is found on mixed substrata and is characterised by a dense hydroid turf growing alongside F. foliacea and other scour-tolerant species. 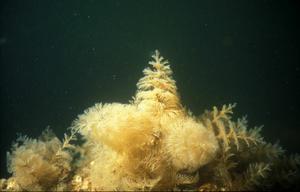