Circalittoral sediment dominated by brittlestars (hundreds or thousands per square metre) forming dense beds, living epifaunally on boulder, gravel or sedimentary substrata. Ophiothrix fragilis and Ophiocomina nigra are the main bed-forming species, with rare examples formed by Ophiopholis aculeate. Brittlestar beds vary in size, with the largest extending over hundreds of square metres of sea floor and containing millions of individuals. They usually have a patchy internal structure, with localized concentrations of higher animal density. Ophiothrix fragilis or Ophiocomina nigra may dominate separately or there may be mixed populations of the two species. Ophiothrix beds may consist of large adults and tiny, newly-settled juveniles, with animals of intermediate size living in nearby rock habitats or among sessile epifauna. Unlike brittlestar beds on rock, the sediment based beds may contain a rich associated epifauna (Warner, 1971; Allain, 1974; Davoult & Gounin, 1995). Large suspension feeders such as the octocoral Alcyonium digitatum, the anemone Metridium senile and the hydroid Nemertesia antennina are present mainly on rock outcrops or boulders protruding above the brittlestar-covered substratum. The large anemone Urticina feline may be quite common. This species lives half-buried in the substratum but is not smothered by the brittlestars, usually being surrounded by a 'halo' of clear space (Brun, 1969; Warner, 1971). Large mobile animals commonly found on Ophiothrix beds include the starfish Asterias rubens, Crossaster papposus and Luidia ciliaris, the urchins Echinus esculentus and Psammechinus miliaris, edible crabs Cancer pagurus, swimming crabs Necora puber, Liocarcinus spp., and hermit crabs Pagurus bernhardus. The underlying sediments also contain a diverse infauna including the bivalve Abra alba. Warner (1971) found that numbers and biomass of sediment dwelling animals were not significantly reduced under dense brittlestar patches. 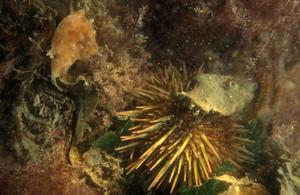