Shrub communities of Azores, Madeira and the Canaries dominated or co-dominated by Erica, Daboecia or Calluna that are either i) pioneer, ii) permanent in thin soils or iii) seral or hedge of mature macaronesian forests (i.e. G2.7, G2.3). Although Erica azorica, E. playcodon subsp. pl. and Erica canariensis (= E. arborea sensu auct. can. & mad. non L.) may participate in the G2.7, G2.3 forest habitats, we strictly circumscribe the F4.3 type to the i), ii) and iii) conditions adding also iv) being nanophanerophytic. See also the G2.7 factsheet. This is a heterogeneous habitat with relation to biogeography, composition, structure and ecological context. Two main subtypes should be considered:

2) Madeiran and Canarian heathland. Several variants of the habitat can be recognized. i) Shrub , sometimes tall-shrub, communities dominated by Erica canariensis, E. platycodon subsp. platycodon or E. platycodon subsp. maderincola along with Morella faya, Ilex canariensis (and sometimes in Madeira Picconia excelsa) that are the tall hedge of the laurel /heathy  forests (G2.7, G23 – Ixantho-Laurion, Sibthorpio-Clethrion and Polysticho-Ericion) or many times their first seral stage (they are included in Myrico-Ericion in both archipelagos). Therefore, sometimes they include elements of the laurel forest (Laurus, Prunus, Viburnum, etc.). The Erica platycodon subsp. maderincola mantles of tree-heath forests in the summits of Madeira are, nevertheless, species-poor. In thin, rocky or dry soils it can have a permanent character. ii) Heath / broom communities that are, in general, seral stages of laurus /heathy forest, in concrete:-  the second seral stage following the Myrico-Ericion stage. In steep, near-vertical slopes, they are admitted to be permanent communities. Along with the Erica species mentioned in 2) of low height, it also includes Erica maderensis (summits of Madeira only) and several species of genus Teline, Adenocarpus, Argyranthemum, Echium, Chamaecytisus that can be co-dominant in the heath /broom variant (see characteristic species, flora).

As its biogeography and ecological is so diverse, there isn´t a unique set of bioindicators of degradation. Thus, on each habitat stance, the loss of characteristic set of bioindicators must be evaluated in comparison to well-conserved descriptions of it (published phytosociological tables, for instance). In general, poorer versions tend to be dominated by just one or two species, few characteristics, less elements of the laurel /heathy forest and more plants of grassy stages. Also, the presence of aliens tends to be greater. In the case of the Azores: Pittosporum undulatum, Clethra arborea, Melaleuca sp. pl., Metrosideros excelsa, Banksia integrifolia, Solanum mauritianum, Laurus azorica x nobilis, Hedychium gardneranum, Criptomeria japonica (shrubby), Acacia sp. pl.; in the case of Madeira and the Canaries: Ulex, Cytisus scoparius, Arundo, Acacia, Hackea, Callotropis, Opuntia, Ailanthus, Eucalyptus, etc..

The situation of this type does not present any threat nor concern as far as disturbance regime does not change its current tendency and climate maintains its rainfall regime constant over the Macaronesian archipelagos. The conclusion therefore is Least Concern (LC).

As a habitat linked to a quite high disturbance level, its recovery after disturbing episodes is relatively quick.

For the habiat it is best to keep the human intervention at a moderate level of logging and low frequency burning. In this way succession towards forest is limited. 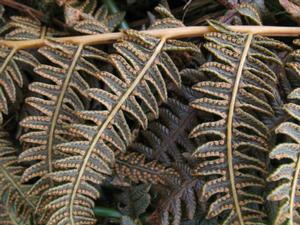 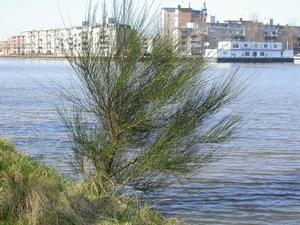